Posted on July 22, 2011 by greenbenchramblings

What is it with House Sparrows? We all know now of the terrible plight of this “cheeky chappy”, the “cockney sparrer”, or as we called them as kids in Gloucestershire, “spaggies”. Their population has dropped drastically, in town and country. A year ago we were missing their constant chirpy chatter here in our Avocet garden as in the six years we had lived here they all but disappeared. We decided that we might reverse the trend a little by putting up a box for them – the real thing, a sparrow terrace with 3 nesting spaces. They had occasionally in the past pushed a pair of great tits out of one of their boxes so we put one of those metal plates with a small hole over the original hole and nearby nailed up the new “for sparrows only” box. The box was on the fence in the side garden opposite our kitchen window so we could watch for developments.

The old box with its new metal hole was grabbed early in the year by a pair of blue tits who took up residence in January and fought off all other prospective squatters. The house sparrows completely ignored their new box except occasionally using it as a perch or toilet. However we soon discovered a pair evicting great tits from a tit box in the back garden. The fight continued for weeks with nesting material being added in turn by the sparrows and the tits. The sparrows won in the end and have now raised a healthy and noisy brood. They are now sitting on the second batch of eggs.

But no sign of activity in the specially provided sparrow terrace – unless of course you count the blue tit family in residence in the end terrace! 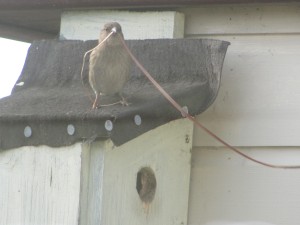 A retired primary school head teacher, I now spend much of my time gardening in our quarter acre plot in rural Shropshire south of Shrewsbury. I share my garden with Jude my wife a newly retired teacher , eight assorted chickens and a plethora of wildlife. Jude does all the heavy work as I have a damaged spine and right leg. We also garden on an allotment nearby. We are interested in all things related to gardens, green issues and wildlife.
View all posts by greenbenchramblings →
This entry was posted in conservation, garden wildlife and tagged nest boxes, sparrows. Bookmark the permalink.
This Veggie Life