Posted on November 7, 2011 by greenbenchramblings

Today we woke to the first frost of the year. My phone tells me its minus one. It’s only a thin weak frost but a useful reminder of how lucky we are to have gone this far into the year without one. Last year we had our first in September and that was not unusual. It also made us feel a little smug that we had got round to giving the greenhouse its duvet of bubble wrap at the weekend. It takes 100 metres of the large bubbled wrap to get the inside safely wrapped for winter – it is the only time I regret owning such a big greenhouse!

Bubble wrap is always so hard to fix up and always looks a mess but it does the job. We used a combination of black gaffer tape and the little plastic fiddly fixings specially designed for the job. 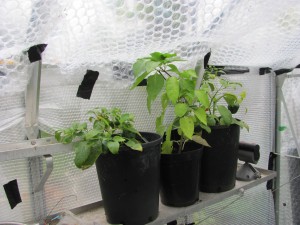 We moved under cover the peppers, chillies and sweet, growing in bags to hopefully get a few more fruits from them as well as the potatoes in their bags planned for cropping in December. We then had the time-consuming task of bringing in any half-hardy plants in pots such as aeoniums, begonias, echeverias, Euphorbia mellifera, salvias and summer flowering bulbs. 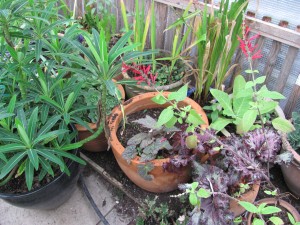 As a belt and braces procedure we take cuttings of some of the salvias, as well as bringing the parent plants in, as they often fail to survive through the winter even under the protection of the greenhouse. 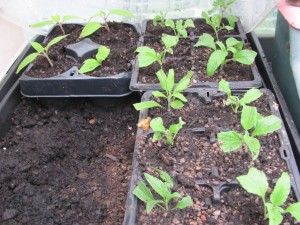 This Salvia with its stunning red flowers which have an added cerise hue in sunlight only started flowering in late October so we could only appreciate its glorious flowers for a few weeks before bringing it into the greenhouse. If the first frost had come at the more usual time in late September or early October presumably it would have failed to flower this year. fingers crossed now that we can keep it through to warmer times.

A retired primary school head teacher, I now spend much of my time gardening in our quarter acre plot in rural Shropshire south of Shrewsbury. I share my garden with Jude my wife a newly retired teacher , eight assorted chickens and a plethora of wildlife. Jude does all the heavy work as I have a damaged spine and right leg. We also garden on an allotment nearby. We are interested in all things related to gardens, green issues and wildlife.
View all posts by greenbenchramblings →
This entry was posted in autumn, gardening, grow your own, half-hardy perennials and tagged aeonium, chillies, greenhouses, grow your own, peppers, salvias, winter protection. Bookmark the permalink.
This Veggie Life

The Greater Garden of Nature