Posted on February 24, 2012 by greenbenchramblings

We left home as the sun was about to rise. The car’s thermometer told us it was already 9 degrees. Things were looking good for a day’s wandering around the RSPB’s reserve at Conway in North Wales. Driving off into Wales the sun rising behind us gave the sky a warm orange glow and the dull flat grey concrete of each bridge we passed under looked as if it was being warmed by fire.

The problem with the coast of North Wales is that it has its own weather! Today was no exception – the closer we got to our destination the duller the sky became and drizzle began to fall. It was to continue all day! Looking out over the reserve it looked very grey indeed!

We stopped near the reserve entrance overlooking the estuary – the tide was well and truly out so it was sand and mud as far as the eye could see. On the sand a few waders probed for invertebrates – a couple of Curlew, a Redshank and a Little Egret.

We entered the reserve proper and wandered along board walks and soggy gravel paths towards the scrapes and pools. At the first hide were treated to a view of a Water Rail, that little beautifully marked rail, much smaller and harder to find than its larger cousins the Coot and Moorhen, who were here wherever we looked. Dozens of Teal, Mallard, Canada Geese and Shelduck fed busily in shallow water and on the muddy margins. Out in open water Tufted Ducks dived constantly for food. A real surprise was a pair of Goldeneyes! The award for the star of the show on this body of water was the Red Breasted Merganzer. Six of these saw billed ducks actively dived for food stopping only for an occasional skirmish. The males looked most dapper with their black and white bodies topped off with green-black heads, red eyes and long thin red bills. Their wispy crests fluttered in the wind.

We moved on wandering through areas of scrub and small trees where Meadow Pipit and Linnets were spotted, through marshy ground and finally reached the estuary. Here the breeze turned to a freezing strong blast, making it hard to look for wildlife. In the muddy foreshore a dozen or so Redshanks fed with even more Black Tailed Godwits. Two Shoveller fed amongst scores of Shelduck in areas where water remained.  Both these species of duck were upending in their search for food in the shallow water. Our walk had taken us in such a short time from the sheltered area close to the reserve centre and coffee shop to this wilderness of wind, mud and driving rain. 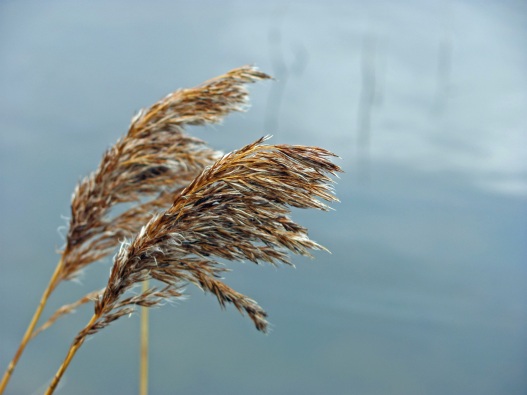 The depth of the dark sky overhead varied as the drizzle came and went. It was amusing to watch the reaction of a Grey Heron to the arrival of the wetter, darker weather. He really seemed to sulk. The two following photos show the change in his attitude – a real mood swing!

He was not a very lively Heron at all. He definitely disapproved of the wet weather. the only time he made any movement was when an Egret landed near him and he let out a loud unpleasant “cronking” noise, sounding more like an animal than a bird. The Egret flew off but we were lucky enough to get a long very close up view of him from a hide near the estuary itself when we stopped for lunch and to escape the strong cold wind.  Seeing these two members of the Heron family together illustrated just how different they are. they both sport crests and shape wise they are almost the same but the Grey Heron looks much bulkier and dull in its black, grey and white plumage. The Egret is the purest white possible in a bird and is slender in profile. The Egret sports a crest on top of its head but also is graced with long wispy feathers hanging down its chest.

We watched our Little Egret feeding just in front of the hide. He performed a shuffling feet dance to stir up the mud and disturb invertebrates and small fish. At other times he seemed to stalk his prey moving slowly, cocking his head and then stabbing at a small fish with his beak. In close up we were amazed by his bright yellow feet – usually you only see his black legs as he wades in shallow water – and a matching yellow ring around his eyes. This sequence of three photos follows him as he stalks in shallow water. 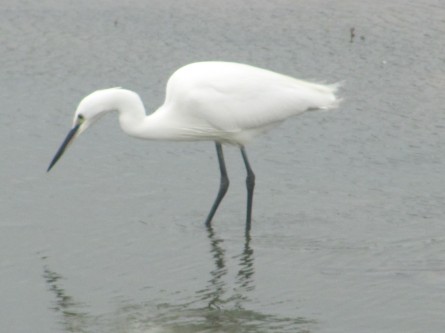 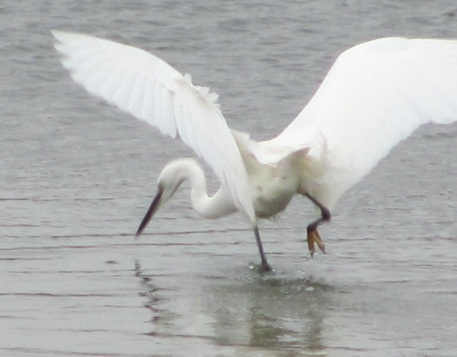 He seemed to feed continuously in sharp contrast to the Heron who had time to just stand and hide from the Welsh weather. Only once did we notice the Little Egret take his mind off hunting. Another Egret flew across from the neighbouring pool and our Egret immediately launched a vicious attack driving the intruder away. The aggressive noise he made was the same harsh “cronking” noise made by the Grey Heron, described in one of my books as “fraink”.

We moved back to the calm of the centre buildings and treated ourselves to a latte and cappuccino. This is the perfect bird reserve cafe as it serves excellent food and coffee and has a whole wall of glass overlooking a scrape, reed areas and bird feeding station. Here we relished our coffees, warmed up, dried off and enjoyed close-up views of Siskins, Reed Buntings and Goldfinches feeding. 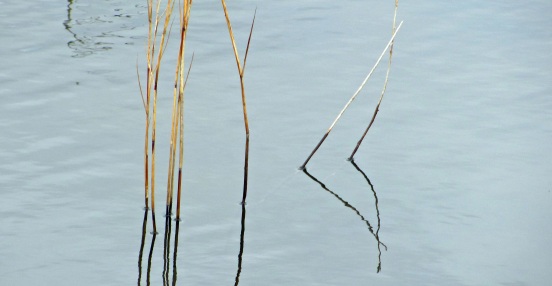 We got soaked, our eyes and noses wouldn’t stop running but what a great day we had. This reserve is worth a visit at any time of the year. The facilities are great and the volunteers most pleasant, knowledgable and helpful.

A retired primary school head teacher, I now spend much of my time gardening in our quarter acre plot in rural Shropshire south of Shrewsbury. I share my garden with Jude my wife a newly retired teacher , eight assorted chickens and a plethora of wildlife. Jude does all the heavy work as I have a damaged spine and right leg. We also garden on an allotment nearby. We are interested in all things related to gardens, green issues and wildlife.
View all posts by greenbenchramblings →
This entry was posted in bird watching, birds, conservation, photography, RSPB, wildlife and tagged birds, conservation, Egret, estuaries, finches, Heron, RSPB, Welsh wilddlife, wildfowl. Bookmark the permalink.