On a cool damp April morning when heavy rain was forecast for the afternoon, we set off to the south of our county, Shropshire, to explore some of the tracks around the Mortimer Forest. We chose to visit the area known as Whitcliffe.  When we parked up in the car park alongside the Forestry Commission offices we knew we were in for a treat. The colours of the trees looked fresh and glowed with every shade of green, and the calls and songs of birds mingled to  fill the air, Nuthatches, Thrushes, Blackbirds and Robins.

We decided, as we only expected to have the morning to walk before the heavy rain arrived, to take the track, called the Whitcliffe Loop, that would afford us a two-mile walk through deciduous and coniferous plantings. We were soon to find that the trail was poorly marked so we were frequently unsure if we were on the right track or not. But who cares, we had a great morning’s forest wanderings.

The beauty of the Mortimer Forest is the sheer variety of habitats created by the areas of different trees, some conifers planted in straight lines for wood production, some wind break tree planting and large areas of native deciduous trees. The odd tree out amongst these if the native larch, Larix decidua, which is a conifer but it sheds its needles in autumn. In April its new needles are the brightest green to be seen in a conifer and its bark is beautifully patterned, textured and coloured.

Almost as bright are the new leaves of the Silver Birches.

Beneath the trees, wildflowers are infrequent but when we find them they are worth the wait. Wood Anemone, Stitchwort and Bluebell bloom demurely between clumps of Woodrush and the leaf growth of foxgloves. 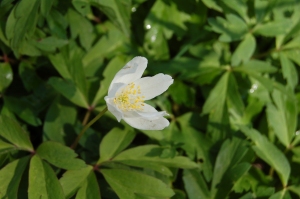 We were delighted to find this anemone with much longer and narrower petals than all the others.

A plant we were surprised to find was a small clump of a native euphorbia with dark stems which emphasised the Chartreuse bracts, tiny yellow flowers within them and the glaucous foliage. 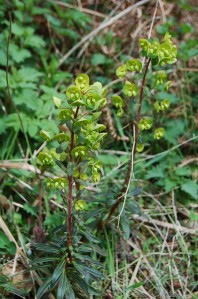 Just over half way around our planned ramble, we entered an area of Cupressus trees planted as a wind break planted to protect newly planted young trees years ago. these heavy-looking trees cast such a deep shade that nothing grew beneath them and peering beneath their hanging branches was like looking into a cave.

All the bird song that had accompanied us up until then stopped. No wildlife seemed to favour this dense, dark area and I can’t blame them. Not my favourite sort of tree – simply too static. The only signs of wildlife as we passed along the narrowed pathway was the occasional high-pitched calls of Goldcrest, Marsh Tit and Willow Tit. Having deduced that we were amongst wind break planting we knew we were nearing the edge of the forest so we looked forward to openness and wide  views.

Not only did we find that but also a well-positioned bench inviting us to sit a while and appreciate the views with a coffee and some fruit. As we approached the open area a flash of green passed rapidly overhead, low to the tree tops and at great speed. it was a Green Woodpecker. We were soon to discover why he was in such a hurry for this area was littered with anthills. Anthills mean ants, their favourite food.

The wooden bench was so popular that the ground in front had been worn away so much that when we sat on it our feet didn’t reach the ground. We could swing our feet beneath like little kids on big benches. The views, the coffee and the fruit were enjoyed in equal measure especially when we were entertained by a Buzzard, which rose from the valley floor a few hundred below riding a thermal that took him past us and way up until he was little more than a black dot. 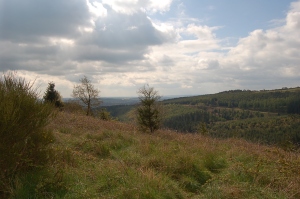 The valley side here dropped steeply away from the edge of the forest where we sat. The ground around us was covered in rough tufts of grass through which tumbled Honeysuckle  and Brambles dotted with Bluebells and Stitchwort. Small trees, Spruce, Birch and Whitebeam, none reaching over a couple of metres tall gave a few perches for finches.

As we took the path back into the forest we noticed butterflies sunning themselves on tufts of dried vegetation, Tortoiseshells and Painted Ladies. Before we reached the dappled shade on the edge of the trees there were more clumps of wildflowers now including Oxalis, with its shamrock like leaves. 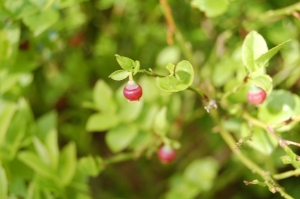 Towards the end of our walk we took a turn into an old trackway where the rays of the sun peered through coppiced trees along the sunken track. Here we were sheltered from the cooling wind and the bird life changed. Blackcaps, Whitethroats and warblers entertained with their song. Courting pairs of Speckled Wood butterflies ignored us and carried on their erratic chasing flight. The Small Tortoiseshells were much more subdued perhaps waiting for the sun to warm them up a little. 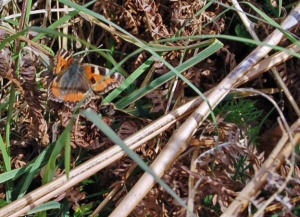 While walking along the stone-paved bottom of the trackway we discussed a Stinging Nettle with unusual foliage, much darker than the norm and with hints of purple particularly deep along the edges and at the tips. The stalks were a pure, deep purple.

We were later to discover that this trackway was an ancient sunken cart track with the wonderfully apt name, Holloways.

Two miles of slow ramblings along footpaths often muddy and soft underfoot and so much to see and listen to. the true highlight of the day was a short few moments when two Long Haired Fallow Deer crossed the path in front of us. We watched silently as these rare creatures trod carefully through the trees not making a sound. These deer are unique to this forest. I couldn’t get a photo of them but I did get a photo of this little friendly fellow.

It wasn’t easy though because he was elusive but he was just too friendly crawling over my hand and even the camera before he finally decided to move to this bramble and pose for his shot.

As we neared the end of our walk after enjoying the presence of such wonderful trees, wild flowers, birds, insects and the occasional mammal, I was subjected to the sight of two of trees that were far from favourites. I really do not appreciate trees that are rigid and never-changing such as these tow we met at Whitcliffe.

Returning to the car park a picnic bench under a tall maple and sitting in the spotlight of the beams of the sun was most tempting.

It was definitely too tempting for Jude and I as we still had a little coffee to enjoy and some apples and pears to accompany it.

What a lovely place for a walk – you picked a good day for it – great to see so many wild flowers and trees already leafing up.

We did pick a good day especially because as we left the car park the rain returned with a vengeance.

You know how to live my friend, and the weather Gods were clearly with you on this wonderful excursion!

The weather gods stayed with us until we left the car park and then the heavens opened! How lucky is that!

So much wildlife! We occasionally have a green woodpecker that visits our garden… he’s a scarey looking fellow with mean eyes (but I’m sure he’s beautiful really!). Thanks for taking me on your walk – I always enjoy coming along with you both 😉

Glad you enjoy our walks. It is good to share them.

You are very observant! I enjoyed going on the ramble and looking at a great set of photos. By the way I have nominated you for the Very Inspiring Blogger Award (see my latest post!).

Many thanks for the nomination – much appreciated. Glad you enjoyed the ramble.

What a beautiful place, there’s nothing like walking with nature. 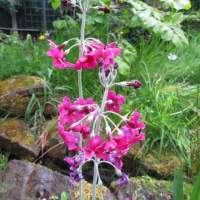 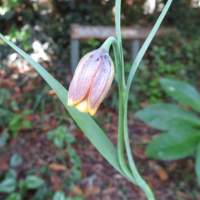 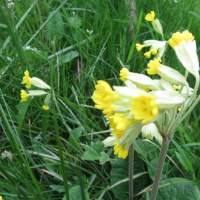 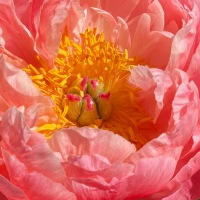 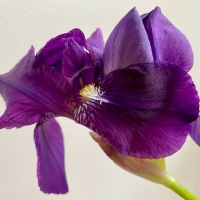