After not visiting the seaside all year we have now done so twice in a week. A few days ago we went up to the north Wales coast and enjoyed a walk along the sea front on a bright warm day. Then we visited the south coast of England and walked along the front at Bexhill-on-Sea. It was cold with icy winds and periodic bouts of heavy rain. How can our weather be so different just days apart? It is a good job we like variety where our weather is concerned and it is a good reason to live in the UK.

Bexhill looked good even under grey clouds and viewed through downpours. There was such an obvious sense of pride about the place. The seafront has obviously had a facelift recently so it now boasts interesting garden designs where even the seating is interesting. I would imagine a garden designer was involved, resulting in interesting materials being used. Even the “Healthy Heart” fitness trail featured exercise equipment that had almost sculptural qualities and actually enhanced the overall look of the walk along the sea front.

It was good to see new architecture sitting alongside the old, mirroring it or picking up on some of its detailing. There must be strict planning controls here but not so strict that they squash innovative new architecture. The only strange decision of the planners seems to be making sure that all the beach huts, traditionally a medium for lavish colour schemes, are painted white. Strange and somehow disappointing to see them lined up in a row all looking the same.

Bexhill is a town reflecting so many periods and styles of “seaside” architecture. There are fascinating features to be found on buildings all along the front. 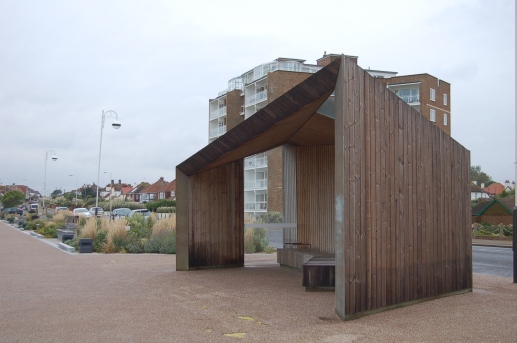 As we had approached Bexhill I suddenly remembered that the little town had a place in motor racing history and after racking my brains and wearing out a few cogs and cells in the process, I came up with the thought that the first motor race had taken place here on the sands. Later I was informed by Son-in-Law, Rob that it was the first in Britain and not a world’s first. This old postcard illustrates one of the early race meetings.

It is often the little details that appeal to me when taking photos at the seaside, details of texture, pattern and shape.

Oh no! I nearly finished a seaside post without a picture of boats! So here it is.

Good to see you looking at some architecture but I see you managed to find a bit of greenery! Sorry your weather was not as good as mine in Hastings.

Yes, I have to have a bit of green.

Ooooooo, I have my favorite shots. I too adore texture. Adds so much interest. From the top, photos 3, 14 and 16! Our backdoor neighbors are moving to Wales for two years on a job transfer. They can’t wait! Margie

Thanks Margie. Those hanging pebbles we found on a garden fence – a lucky spot. Your neighbours will love Wales – I should know as we live a few miles from the Welsh/England border. Good luck to them.

I’m always amazed at photos of old race cars… can you imagine if they were travelling downhill, came across an unexpected bend and had to brake? We take good steering and brakes for granted now!

We went to Goodwood Revival meeting last year – it was amazing. We even saw Stirling Moss driving his old Merc!