Brown Moss is an area of wet land, shallow pools, reedbeds and marsh surrounded by woodland, part of which contains old coppiced wood. We parked hidden in trees and emerged into the open to see the “moss” in front us. There was less open water than we remember. 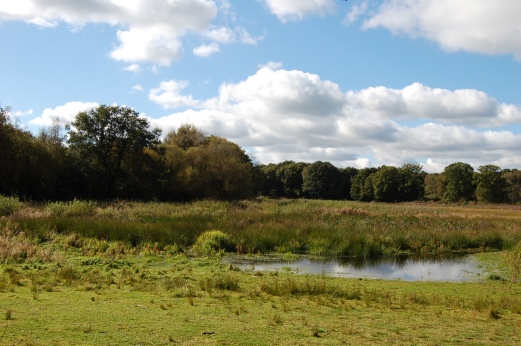 Where the woods meet the marshes occasional Silver Birch grow with their white stems glowing in the sunshine now that most of the yellow leaves of autumn have fallen to colour the ground beneath in shades of primrose.

We skirted the marshy area and wandered into the woodland in search of fungi. The woodland here is mixed, some tall specimens with patches of coppiced smaller trees, some deciduous and some evergreen conifers. Jays foraged in the oaks for acorns which they buried in the soft ground between the woods and the pools, hoping to find them in times os severe weather. They were so busy they took little notice of us so we got close enough to enjoy the blues and pinks of their plumage and smile at their strange hopping gait in the long grass.

A pair of slim birches presented a natural portal into the woods, but Jude the Undergardener decided to consult the map – just in case it was Mother Nature playing a trick on us! 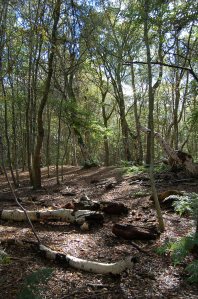 There were fewer fungi to see than expected and we were particularly disappointed not to see any Fly Agaric, but there were bracket fungi and earth ball fungi to find. The brackets are found on the trunks and the balls on the ground below. 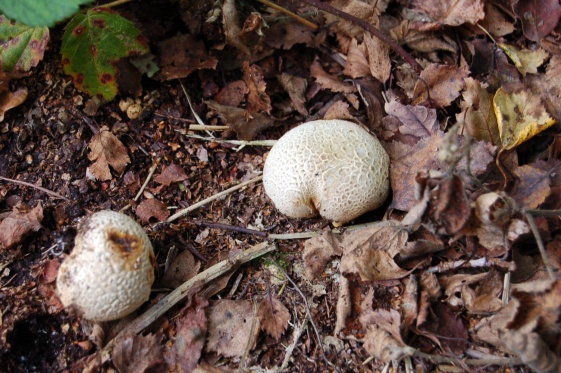 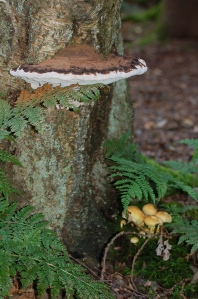 We stopped deep in the woodland for a coffee just where we found a fallen birch conveniently providing us with a wooden bench. With the long zoom on my Nikon I scanned the trees above to see what could be seen from this different viewpoint. A tiny white ball of fungus stuck like a table tennis ball high on a tree trunk.

On the edges of the wood the skeletons of the summer’s flowers attracted spiders to make webs and the low light lit them up. 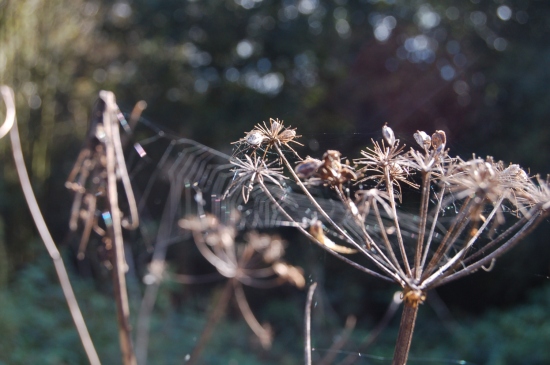 The low lighting continued spotlighting foliage along the edge of the marshlands. We skirted the marshland on soggy paths and occasional boardwalks.

At times the wet areas joined with the woodlands and mystery pools hung in the shadows. The water in the pools was clear but tinted with the russet colours of the underlying soils.

Two finds kept us mystified for a while. The first was these strange black and white colour washes on the sawn end of a felled tree trunk. It appeared to be some sort of fine fungal growth but we remained unsure. 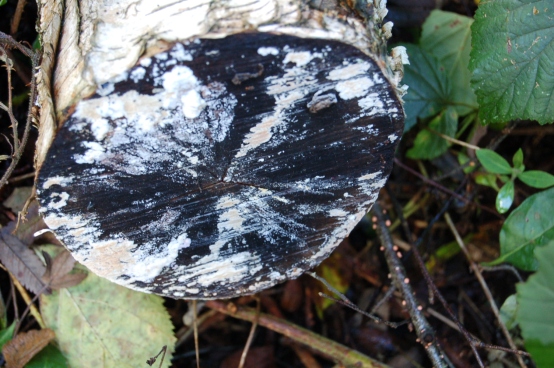 The second mystery was solved after a bit of tracking Sherlock Holmes style with noses to the ground and eyes peeled. The trail began with the spotting of a small pile of outer leaves of maize cobs. We followed them until we found a whole pile around a tree stump. Two clues lead us to the answer. A badgers’ sett in the deeper shade of the trees and on the edge of the wood a field of maize.

Yes! the resident badgers had found themselves a fast food outlet!