In the last few weeks of last year we harvested two plants that we have rarely harvested before but for very different reasons.

The first crop came from the greenhouse where the plants had been growing away all summer in growing bags after being sown in the propagator early in the spring. We were given the seeds and having never tried them before we decided to give them a go. Tomatillos – the name sounding somewhat like tomatoes and the plants and fruit ending up looking somewhat like cape gooseberries.

Here is the crop, now we had to decide what to do with them. Chutney seemed to be the only answer, but I decided to turn to Google for ideas and perhaps if we were lucky, recipes. 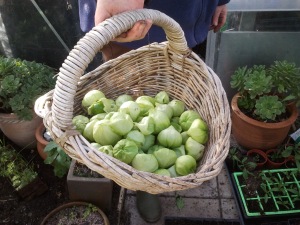 And here they are closer up, thin pale green papery sheaths around fruit like green tomatoes. They didn’t look ready to harvest but we had heard somewhere that this is the stage to pick them and as the plants were suffering as temperatures cooled down, we went ahead and plucked them from the stems. 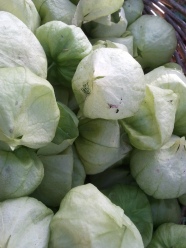 O.K. Back from a Googling session and I now knew that the botanic name for tomatillo is Physalis philadelphica, which makes it a relative of the Cape Gooseberry and a member of the Nightshade family. It originates from South America. In Mexico it is a staple food of the diet and is often used to make green sauces. Here they are called “Tomate Verde” and are most appreciated for their green colouring and sharp taste.

I found recipes for soups, stews, salsas and yes, chutney.

The second “odd” crop is bamboo, odd because it doesn’t often seem to be grown in the uk for anything but decorative reasons and because it is the first time we have seriously harvested our bamboo to use as garden canes. We grow three different bamboos for their different stem colours and originally planted them for their ornamental value, tall and graceful, moving gently adding sound to quiet days. 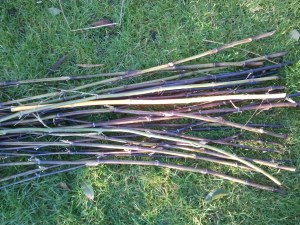 Growing your own garden canes is a good way of helping the environment. Importing them from China seems a terrible waste of resources.

It was mostly the black stemmed variety that was ready this year. Their stems are tough so I struggled with secateurs before turning to a pair of nicely sharpened loppers and getting the job done. The range of colours is very wide as the photos below shows.

Similarly we harvest our prunings, utilising the large shrubby ones for beanpoles and the scrubbier smaller ones for beansticks. We started to harvest these last week and will continue as we sort out the garden in readiness for the coming growing season. 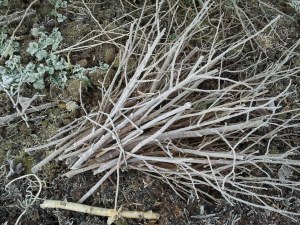 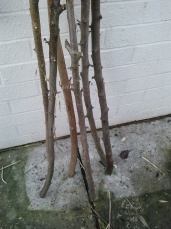 Peas and beans seem to like to twine themselves around these rougher sticks and poles in preference to the bamboos available in garden centres. And of course we must remember they are self-sustaining, so there is no cost to the environment.