Last week a wild wind phenomenon hit our allotments and left a trail of destruction in its wake. A “funnel” tore its way across the plots and it flattened sheds in its path. It moved sheds from their bases. It took the roofs off others. Anything light was scattered about, compost bins, water butts and cold-frames.

In the first pair of pictures half of the felt from the shed roofs had been torn off typical of the minor damage to many sheds. Others like the one in the third photo had been blown from off its base and it collapsed in a heap, with the contents crushed inside. See if you can see which bit is which.

Others fell off their bases and landed on their sides remaining almost intact while others lost their roofs which took off like kites. 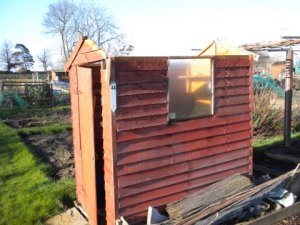 On our own plot there was little damage. We had an allotment years ago on another very windy site so we  were prepared like all good scouts and guides. We had sunk heavy fence posts at each corner of our shed and fixed the shed by screwing it firmly from the inside. (see photo below). Our tripods had crashed, our wooden planks awaiting transformation into a raised bed for strawberries were blown across the plot, our central metal gazebo was well bent and our flying scarecrow, Biggles, was blown from the top of it and we found his plane crash landed nearby but sadly Biggles and his head had parted company. 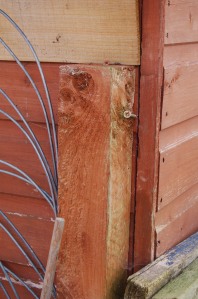 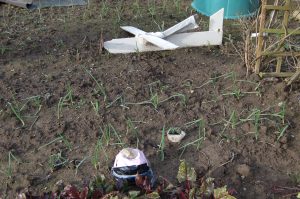 This devastation came in the middle of an ongoing problem with water-logging and floods, so it really felt as if the weather had got it in for us.

At home we did not get the funnel passing through but we had days of gale force winds roaring through the garden. It managed to lift our lovely Ceanothus right out of the ground roots and all! The tree ties had been broken and the tree stake had snapped a few inches from the ground. The last of our rose arches finally collapsed hurrying up our replacing them with wooden arches.

When Jude and I next went up the lotties a week after the great storm we were amazed to find everything had been put back to how things were before, most of the sheds were back on their bases, roofs repaired and those that had toppled over were upright again. The biggest surprise of all was to see the shed that had barrel-rolled down the path back on its base and looking pretty good considering. Without saying a word to Paul, the owner of the shed, some fellow allotmenteers had got together and moved it back for him. Just look how good it looks in the photo below. In the second photo if you look in the background to the right you can see Henry’s shed also back in place and roof repaired. This is why we call our site Bowbrook Allotment Community with the emphasis on community.

The storm hit mostly during the night and then had abated by mid-morning. In the afternoon two members emailed me with photos and details of the plots that had received damage. This meant that I could contact the individuals concerned and let them know the sad news. One couple went round the sight with a smart phone and as they found a plot that had sustained some damage they sent me a photo with details and plot number.They even made some damaged sheds safe and did temporary repairs. This sort of helping each other is what makes life easy for me as Chairman. I felt proud to be involved!

Most of the photos in this post are from members of Bowbrook Allotment Community.

I’m so sorry for the devastation. It is heartwarming to see how your “community” pulled through it together and is getting back on track.

Wow, what a shock! glad you seem to have rallied round and recovered well!

Reblogged this on Old School Garden.

Sorry to hear about the devastation on your allotments but what an uplifting community spirit you all share. Nothing, not even extreme weather, can keep that down. 🙂

Nature does surprise us, and not always in ways that we’d like. Hope that the clean up isn’t too hard on you, and sometime this sort of excise might help you see the space in a new way.

Sounds like Biggles has fulfilled his destiny. Good for him, but not so much for the sheds.
Glad to see that most things have already been set right, I’m hoping that’s it and you can finally ease on in to spring!

Oh Malc, sorry to hear this. Everybody rallies around to help each other which is true community.

Oh my gosh Malcolm, obviously (well to me it would be, as a weather geek) this so-called funnel touched down and thereby became one of the most violent phenomena on earth, a tornado. I hope there were no fatalities other than the destruction you have shown, I’m sure you will bounce back soon.

We have just about got everything back together by helping each other out. Showed the spirit of community. Malc 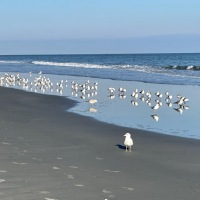 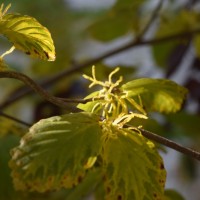