Jude and I arranged a coach trip to visit some Cheshire gardens for the Shropshire Group of the Hardy Plant Society as part of our programme secretaries role. The main garden was Arley Hall but we added on two smaller gardens as a contrast, which I am going to concentrate in this blog ,The East Garden within the Arley Hall Gardens and Grafton Lodge near Malpas.

We were given the privilege of being given a tour of the East Garden inside the main garden at Arley Hall. The East Garden is owned and tended by the same person who runs the nursery there which specialises in unusual quality perennials so we were in for a treat. We were even given a short talk about how the garden was created before we looked around. It was an intimate garden with strong structure created by paths and trimmed hedges all softened by mixed borders of perennials and shrubs. It was raining all the time we were exploring but the colours glowed through especially the yellows. I shall leave you to enjoy the photos I took. 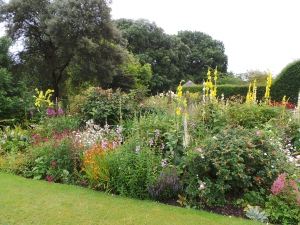 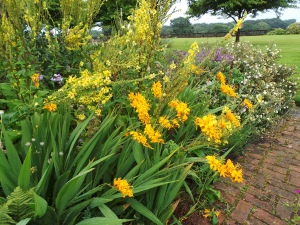 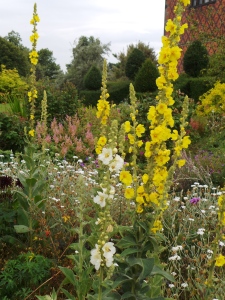 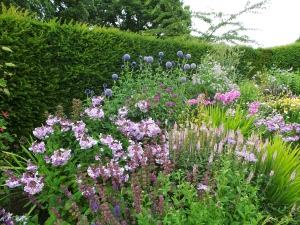 We ended our day by visiting a 2 acre garden in a tiny Cheshire village half way home, where we enjoyed a wander and a break for tea and cakes. The garden is owned by Simon Carter and Derren Gilhooley, who also designed, created and now maintain it. It is a garden full of surprises, original touches and lots of enticing paths and junctions. We were enthralled by the unusual collection of small trees and herbaceous plants. 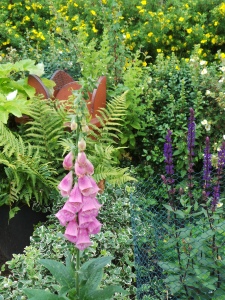 Our members were soon milling around keen to take a look around what looked to be an interesting garden. They were right! 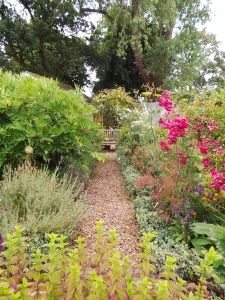 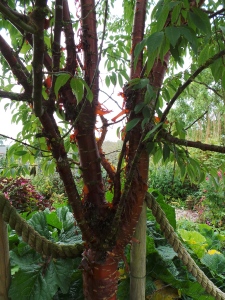 Many members were surprised to see this little specimen of Catalpa bignoides, the Indian Bean Tree in flower. Being a small tree it meant that we could get a close up look at the flowers that were reminiscent of foxgloves or Horse Chestnut. 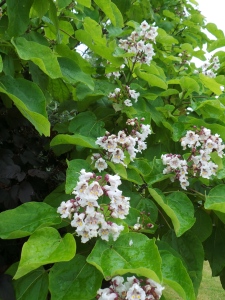 This is a garden that as you wander around you are stopped in your tracks by original ideas that make you wonder “Why didn’t I think of that?” In the first shot below we see a plant pairing that works so well but both plants ,the Birch and the Lysimachia, are such ordinary plants. Together they look great. The second shot shows a low growing hedge that made all of us take a second look as we had never seen this plant, a shrubby Potentilla, used as a hedge before. 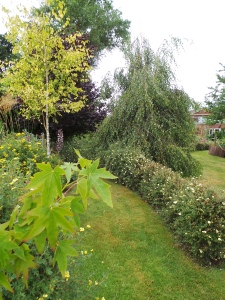 This plant combination similarly impressed, once again a Birch but here partnered by an Acanthus.

As we left after a great day out we were waved off by Simon and Derren who had been wonderful hosts and by this friendly garden glove. 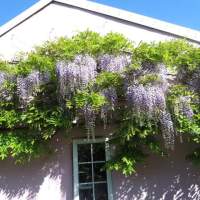