Haworth – Village of the Brontes – Part One

Posted on November 16, 2014 by greenbenchramblings

We spent a midweek break in Yorkshire this autumn, combining a return visit to the RHS Garden Harlow Carr, with a return to Saltaire and a first visit to the village of the Brontes, Haworth. A busy few days full of interest, enjoyment and variety.

First I shall share with you our visit to Haworth a village up on the moors of Yorkshire. The village and the moors are closely linked to the well-known and much loved family of writers, the Brontes. We found the village after miles of travelling high in the moorland on roads with regular steep climbs and descents. The road began to drop steeply as we approached the village and signposts indicated a car park on the edge of the village. We parked up in a car park hidden in woodland and from there a footpath took us into the very heart of the village.

Haworth is a beautiful place! A village with a strong community feel to it and a centre for creativity where many artists and craftspersons live, work and display their work. To add to the enjoyment of Haworth we discovered that Halloween was due to be celebrated fully. We also discovered that the village has some most excellent coffee houses!

The path took us down below the village’s allotments where the hens entertained us with their contented clucking as we passed unnoticed. We passed the back of the church and entered the very heart of the village, the Square. 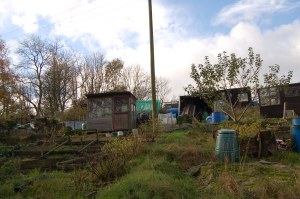 Small businesses clustered around the Square welcoming visitors. You can see how the street drops steeply away from the Square. We decided that the number of coffee shops reflected the steepness of this hill – visitors need lots of places to stop and rest! 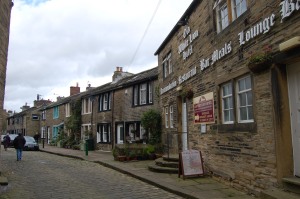 We soon realised that this village had a real sense of community feeling accompanied by an equal sense of pride with a gentle humour running through. Just look at the path gardens under the front windows of these cottages complete with seats. A great place to share your thoughts with neighbours, greet visitors with a friendly smile and watch the life of the village going by. Nearby this little humorous figure enjoyed life in another front garden. 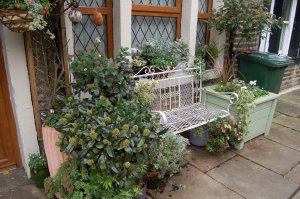 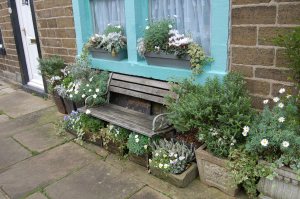 There were frequent reminders too of the place that the Brontes hold in the hearts of the villagers.

We followed part of the village trail that encompassed the places most relevant to the life of the Bronte family. We had to walk to the edge of the village to find the starting point where we began with a look at the Sun Inn where in the mid-19th century turn pike tolls would have been collected, and then close by we found the schoolroom which was linked to the West Lane Methodist Chapel which has since been demolished. Behind this schoolroom, which is now the meeting place for the Methodist congregation, we found the old graveyard which afforded wide spreading views over the valley. 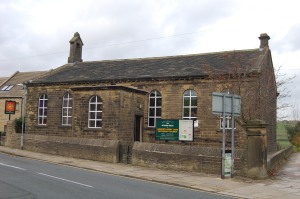 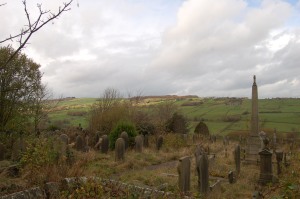 Close by was the rival West Lane Baptist Chapel which had an extensive school room added at the rear. It seemed amazing that this little village huddled in a valley bottom supported several chapels and a church. It reflects the life style of the time, when employers expected their workers to attend their chosen place of worship in order to keep their jobs. Some believed it would keep them out of the inns and public houses.

The second photo below shows a strange arrangement of old gate post ornamentation now displayed atop a garden wall. 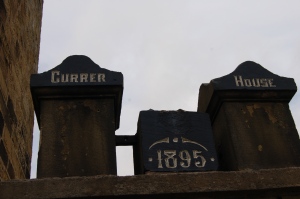 A short walk down the street back towards the heart of the village we found this beautiful and very old building, Townend Farm with its attached barn. These were built in the 17th century but still retained much of the original features including the most beautiful windows. 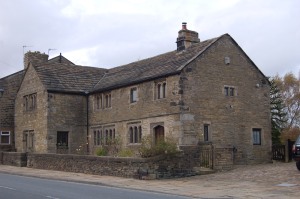 We next found a row of back-to-back workers cottages, and we could tell from the relatively large area of upstairs windows that some sort of weaving must have gone on here. The terraces also had basement dwellings below the street level.

The trail leaflet took us back to the centre where we stopped to look at the interesting array of shops. The Tourist Information Centre was housed in this strange thin building squeezed in a small space between two streets as they merged. The building has a short tower and pyramidal roof which was added when it changed from being the “Mechanics’ Institute” to the “Yorkshire Penny Bank”. The square here sits at the base of the wide steps leading up to the church. The village stocks are still in place outside what were once the post office and a temperance hotel. This teetotal hotel was supported by Patrick Bronte whereas rather ironically Branwell Bronte preferred the building opposite, The Old White Lion Inn. 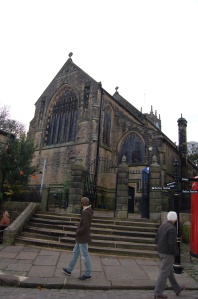 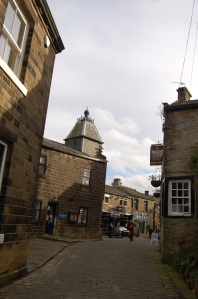 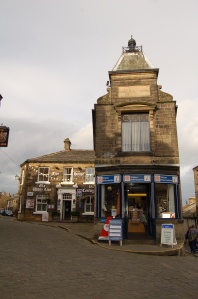 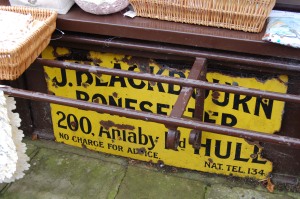 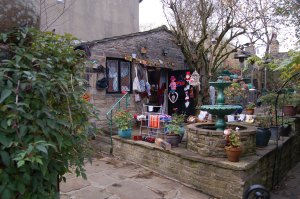 The Main Street led us out of the square as it dropped away steeply. We took a detour to the church before embarking on the downhill climb to discover the delights of that street. Part 2 of my Bronte posts will see us visiting the church and the Main Street.

A retired primary school head teacher, I now spend much of my time gardening in our quarter acre plot in rural Shropshire south of Shrewsbury. I share my garden with Jude my wife a newly retired teacher , eight assorted chickens and a plethora of wildlife. Jude does all the heavy work as I have a damaged spine and right leg. We also garden on an allotment nearby. We are interested in all things related to gardens, green issues and wildlife.
View all posts by greenbenchramblings →
This entry was posted in architecture, buildings, Church architecture, photography, Yorkshire and tagged Brontes, churches, community spirit, Halloween, Haworth, villages, Yorkshire. Bookmark the permalink.

3 Responses to Haworth – Village of the Brontes – Part One