So we carry on now as we move from the Harris-Bugg designed Kitchen Garden to the Paradise Garden, a prairie style garden, designed by Tom Stuart-Smith, a garden we had high expectations of.

We definitely were not let down as the planting was excellent and the moods changed as we moved through the different beds. As with most Tom Stuart-Smith a large reflecting pool with rills featured strongly and added the extra feelings provided by water.

Half way down the left hand wall a pair of lean-to glasshouses invited visitors to move through them for some new plant surprises, including aeonium and black tomatoes..

A few surprises awaited us at the base of the greenhouse brick wall beneath the glasswork.

We can now look at more of the wonderful planting style presented by Tom S-S throughout this section of the walled garden.

The master of prairie style gardening, Piet Oudolf, always reminds us of the importance of choosing plants which die beautifully, hence his reliance of grasses and late herbaceous perennials. Tom S-S has the ability to select such plants really well.

We spent a long time in the Paradise Garden as it was so beautiful and atmospheric. Before we continued with our exploration of RHS Bridgewater we decided on a coffee break where we found the first real problem with the creation of this new garden.

The refreshment facilities were so inadequate and badly designed that a half-hour queue was expected so long queues formed, made up of grumbling people wondering what was going wrong. A new garden and newly designed facilities should give an opportunity to get things spot on.

It was such a pity that the RHS failed to get aspects of the Welcome Building right after putting so much effort into the gardens themselves. 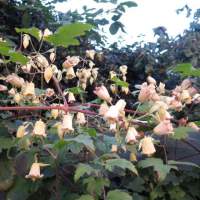 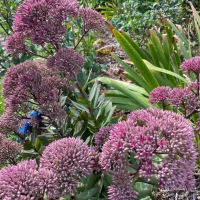