The garden is once again confused by the weather in October when we expect to be seeing more signs of autumn but there remains very little. The Cercidiphylum japonicum was bright yellow as its foliage turned autumnal and soon lost its foliage. We enjoyed the brittle toffee aromas the yellowed leaves emitted. Most of the other trees and shrubs remained green until mid-month.

All around us in the countryside the native Silver Birches have turned shades of yellow but our ‘albosinensis’ and ‘utilis’ cultivars resolutely remain green.

The first page for this month was all about another gardening task.

I began my diary entries for October writing, “A major task that took us through from the last week of September and well into October, was the redevelopment of our ‘Prairie Garden’, which over the years has somewhat lost its way.”

The first three photos are about us, “Clearing the original ‘Prairie Garden’ plantings” and the second set show us “Adding organic compost as a deep mulch, raking it in and then fixing in the seep hose.”

The next pair of pages feature October berries and flowers. The first page was about berries where I noted, “With each passing October day trees and shrubs colour up with berries – cotoneasters, malus, sorbus and hollies. Climbers and a few perennials follow their lead.”

The next page featured October flowers and included a gallery to cheer us all up.

“So many garden writers still imply that October is the end of the gardening year, but this is far from the truth. I took this set of photos in the middle of the month to illustrate how many plants ae still flowering away in our garden, roses, succulents, bulbs and herbaceous perennials.”

As always, I am in awe of your journals. I also applaud whoever trimmed the boxwood. I try to improve my skills each year, but I’m not making great strides. 🙂

This site uses Akismet to reduce spam. Learn how your comment data is processed. 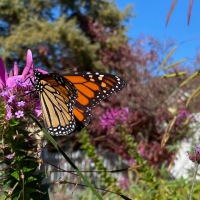 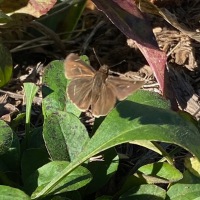