You may remember in an earlier posting on my Greenbenchramblings blog that we enjoyed a walk up a local hill to find the stone circle called Mitchell’s Fold. Recently when my brother and his wife, Graham and Vicky, came to stay with us in lovely Shropshire they fancied a walk somewhere with a feeling of openness, calm and peace. So, we returned to “The Fold”.

For the first set of photos I stood in the middle of the stone circle and took a series of six pics as I moved around in a circle taking in the 360 degree view. 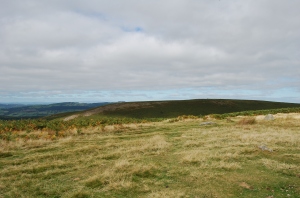 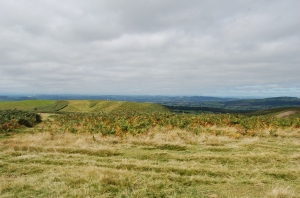 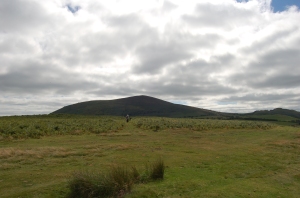 And then I took a series of shots of the stones themselves, the stones that give this special place a unique feeling and atmosphere. Calm. Peace. Contentment. When we stood within the circle of stones we realised why it has been for thousands of years a place of worship and magic. 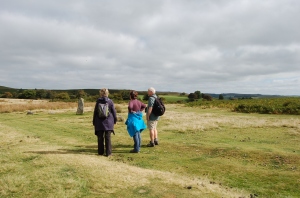 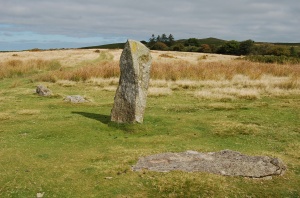 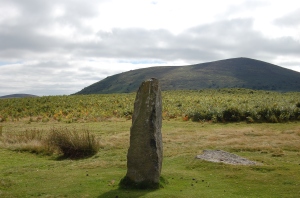 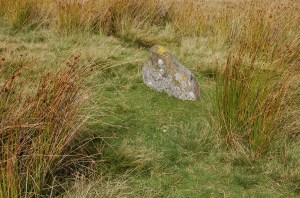 Mother nature has been at work here growing beautiful grasses, sedges, fungi and flowers specially suited to the difficult terrain. 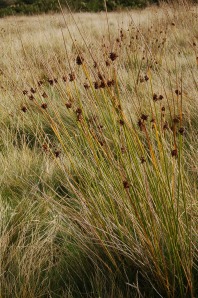 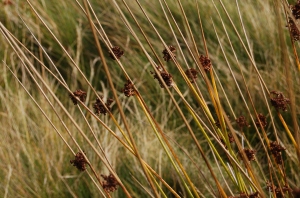 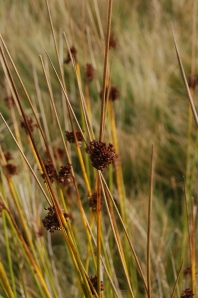 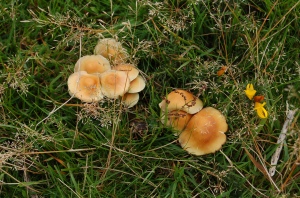 Graham and Vicky who live down in a town in the South of England, were blown away by the massive views and the 360 degrees through which eyes and mind can wander. 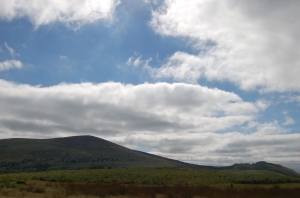 This place is where we expect to see unusual birds but not very many of them. Today was no exception as we enjoyed the sight of small pipits and finches being buffeted in the winds and birds of prey such as Hen Harrier, Red Kite, Kestrel and Buzzard hunting in their own special ways taking advantage of the slopes and thermals. We met a special creature on our way up the track from the stone circle to the cairns atop the hill. A dung beetle. Its name is a little off-putting as is its habit of moving dung around by rolling it into balls. But they are fascinating little critters who are one of nature’s great recyclers. This little glossy black spherical beetle had iridescent kingfisher blue legs that flashed as it moved and when turned over it revealed similar brightness 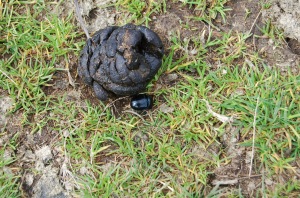 As we turned at the end of the outward leg of our trek we made our way up to the top of the ridge where we stop for refreshment at the cairn. We searched for a stone as we moved uphill as we like to follow the tradition of putting our own stone on the cairn to mark our presence. The views from the cairn wre stunning and simply huge! 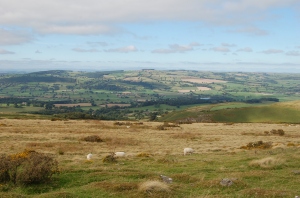 Our little stone sat happily among its much larger cousins who will protect it from the extremes of our weather.

The coffee and fruit stop was most welcome and came at the right time as Vicky and Graham’s looks of anticipation illustrate. 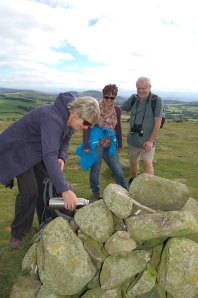 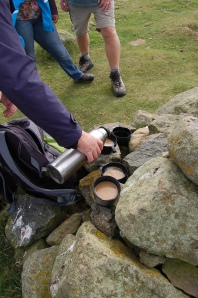 Suitably refreshed and impressed with the hill top cafe facilities we made our way along the ridge and slowly back down to the car.

On the way back down we came across an area where the bracken was glossy and shone in the afternoon sunshine, a phenomena we have not experienced before.

2 replies on “Return to the Fold”

That was just beautiful, and I love the dung beetle!