Developing 3 spaces in our garden – part 3

Posted on February 23, 2017 by greenbenchramblings

The second new area we were able to develop this winter was a very small border created when we rationalised our sheds. The bed was originally used for a selection of mints which we used for cooking so the soil had to be removed and very bit of mint root removed. Some is bound to come back though as it seems impossible to rid yourself of mint in one go. We will have to keep our eyes peeled. As yet we have not named this little patch but I guess it may end up being something akin to “The Old Mint Patch”.

We began by erecting a screen wrapping around behind the bed and one end and we chose willow hurdle panels for this as it lets some wind through but gives some protection. We also love the natural rural look of it, and have used it effectively elsewhere in our garden. To match the natural look of the fencing we added a border edge of log-roll.

We planned our planting in three layers. First plantings were climbers, followed by shrubs and finally herbaceous perennials including grasses. The first climber we planted was Trachelospermum asiaticum, chosen for its flowers which are creamy coloured and scented in strong contrast to its dark green glossy foliage. We partnered this climber with a Honeysuckle and a Clematis. Clematis Fragrant Auberon has creamy-white, heavily scented flowers in spring contrasting strongly with its evergreen foliage. The Honeysuckle was Lonicera Spring Purple, where the purple refers to its foliage.

The shrubs we selected were favourites of ours which had graced our wishlist for a few years now so this new, unexpected planting opportunity meant they could now leave their place in the wish list and grace the new border instead. Firstly we planted a Hydrangea aspera, a summer flowering shrub called H. a. “Hot Chocolate”, so we look forward to its lacecap flowers consisting of pink florets surrounding violet florets in the summer, and of course its foliage which is a chocolate colour above and wine-red velvety textured below.

We are always pleased to find space for another deciduous, so we planted a specimen of Euonymus planipes in this new border. We put it in when it was leafless and we spotted its beautiful mahogany long thin leaf buds. Later it will boast bright pink fruits with vivid orange seeds hanging from within, an incredible colour combination.

Our third shrub was an Abeliophyllum distichum, which was showing its gently scented pale pink almost white flowers. We look forward to its foliage turning rich purple in autumn. 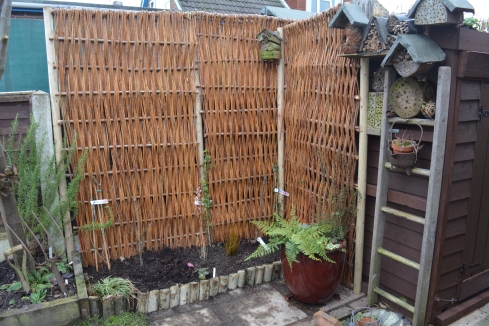 The final planting later to put in place was the herbaceous layer where we selected plants mostly for their unusual foliage but a few will flower. Thus we planted three Saxifrages – S. stolonifera called “Hime”, S. fortunei “Blackberry and Apple Pie” and S. stolonifera “Maroon Beauty”, strongly textured, coloured foliage and unusual shaped flowers. We planted a fern too to link across to the one in the container which I write about later. We chose Dryopteris erythrosora “Prolifica” which features copper foliage each spring. Three Libertias join in to give spikes of foliage some with coloured stripes and white flowers in the summer and autumn. These Libertia are L. ixioides “Taupo Sunset”, L. peregrinans “Gold Leaf” and a third is an unknown species we grew from seed. We finished with our usual grasses, essential in every border, so we placed between the other perennials three Uncinia rubra,

We also had space adjacent to the new bed for a large stoneware pot which matched the  one at the far end of the path close by. We planted this up with a Gaultheria mucronata “Sneeuwwiyje” which I think translates as “Snowdrop”. It sports red stems and shiny dark green foliage and in summer white flowers with hints of soft pink followed by white berries later. Beneath this shrub we planted a fern and a couple of trailing ivies for year long foliage colour and texture. The ivies Hedera “Golden Kolibri” and Hedera “White Wonder”, the names reflecting the colour of the leaf variegation. The fern was Polystichum setiferum “Plumosum”, with soft textured foliage. 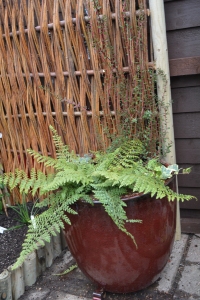 The final flourish was installing a wildlife “village” of varied insect homes, some coming from the old garden shed others newly made. 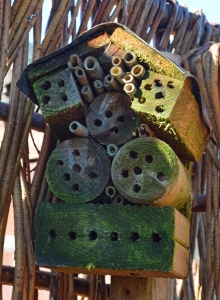 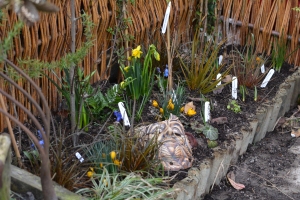 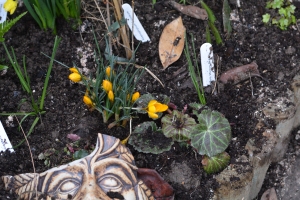 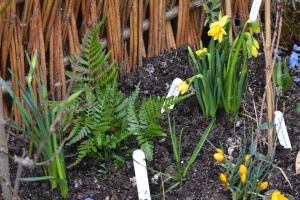 We then had to sit back, let Mother Nature and all her soil workers and the weather do their best and watch the new patch develop. Maybe it will develop well enough to appear in my garden journal later in the year.

A retired primary school head teacher, I now spend much of my time gardening in our quarter acre plot in rural Shropshire south of Shrewsbury. I share my garden with Jude my wife a newly retired teacher , eight assorted chickens and a plethora of wildlife. Jude does all the heavy work as I have a damaged spine and right leg. We also garden on an allotment nearby. We are interested in all things related to gardens, green issues and wildlife.
View all posts by greenbenchramblings →
This entry was posted in climbing plants, garden design, garden wildlife, gardening, grasses, hardy perennials, natural pest control, ornamental grasses, ornamental trees and shrubs, Shropshire and tagged Avocet garden, berried shrubs, climbers, climbing plants, flowering shrubs, grasses, ornamental grasses, shrubs, the garden at Avocet, trees and shrubs. Bookmark the permalink.

3 Responses to Developing 3 spaces in our garden – part 3