When Bowbrook Allotment Community first opened we had a old farm pond on our boundary fence but it was fenced off and we had no access to it. After a few years though as the site was extended on the pond side it was integrated into our gardens and the town council put a low security fence around it with a lockable gate. We then had to wait for it to be released into our care which finally happened early in the winter of 2014. This is the story of what we have done to it so far and about our plans for its future.

Diggers came in and scooped out all sorts of rubbish thrown into the pond by the farmer over the years, rusted coils of barbed wire, rotting fence posts, old metal fences, branches and boughs of trees. The old puddled clay layer was exposed and smoothed off. The aroma was disgusting! Sadly there was little sign of plant or animal life in the pond. At least all this disturbance didn’t upset the wildlife, the birds soon returned to the trees.

As a community garden determined to increase the biodiversity in our 6 acres there was no question that it would become a wildlife pond. To begin with we had to recontour the area between the pond itself and the fence to make passage around it easier and safer. It was hard graft and took a lot of volunteer hours to get it done.This will enable us to keep a path mown all the way around the pond for maintenance and enjoyment. But first we must rotavate the pathway to prepare it for grass seed sowing as soon as the weather allows.

You can see from the group of photos below the area we have to work with and the work we have done so far, the lopping of the trees, the path leveling and the preparation of the bog garden. The pond itself is about 20 x 10 metres and the marshy patch about 8 x 7 metres so pretty impressive! And then there is a margin area varying in width between just over a metre to about 4 metres. W have set ourselves a mammoth task! But we have allowed ourselves a year to get it right. So far things are moving along much more quickly than anticipated as opportunities have come our way.

The next photo shows the bog area at the end of the pond where the drainage pipes from adjacent farm land brought the water into the pond. This was a steep sided marsh area with a tiny stream meadering through it. We have piped the water below the area now and re-contoured the sides to make it safer. This area will be planted with native and other wildlife attracting plants such as King Cup, Liatris, Yellow Flag and Flowering Rush.

We have recently started the planting and will soon be adding far more. Some we will get as donations from our members and neighbours but others we will get from local nurseries once they have got their stocks out. So far we have planted different sorts of Irises, Water Mint, Water Forget-me-Not, Bog Beans and oxygenators. The first pair of pics shows Jude collecting plants from our pond at home and the second pair shows Sherlie planting some in the new pond. 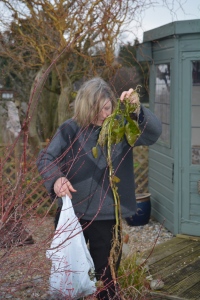 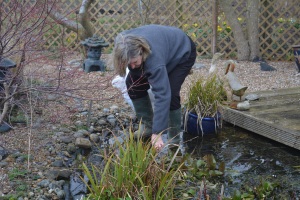 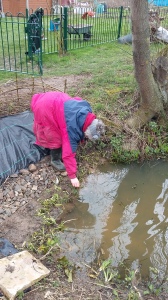 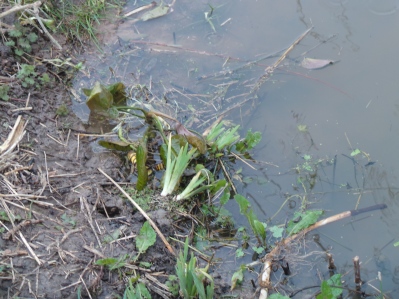 Several mature Ash trees surround the pond so some surgery was required to let more light in and help plants grow healthily. The bough below was slowly collapsing right over the water across to the far bank so caused us great concern. We had to cut it before it fell! We need to look after the health and safety of our members. I shall show this work in part two.

We have put up nest boxes, created a bird feeding station and are creating lots of mini-beast and amphibian habitats. Several are up in the group of Ashes that border one end of the pond. 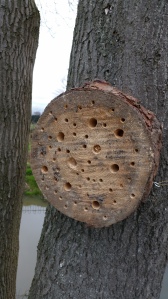 We have created extra wildlife habitats and shelters along the perimeter fence creating them from recycled items and natural materials. 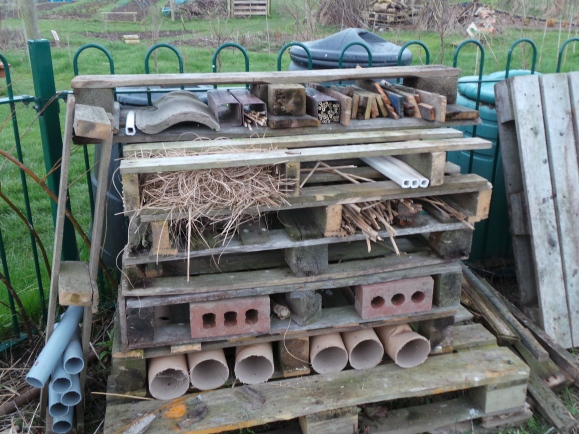 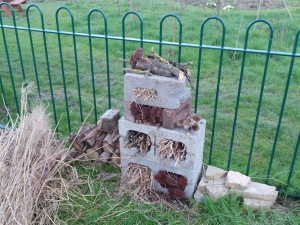 Probably one of the most exciting elements of the whole project has been the creation of a bird hide for the children to use. This began as a battered old shed donated to us by a plot holder and transformed into a rather fine hide complete with a noticeboard for recording,some identification charts and a small library of identification books. Two plotholders, Sean and his dad Vince volunteered to carry out the conversion and soon other family members joined in. The finished hide was way beyond our expectations as they managed to fit a kneeling bench down the one side to enable children to look through the hatches they had constructed. For wet days when the hatches need to stay closed they added a perspex window. All this from my very simple plans and drawings!

Here we are moving the old shed from one side of the site to the other in true Roman style, rolling it along on round stakes. It proved a great adventure as it kept trying to change shape and the door constantly flew open. 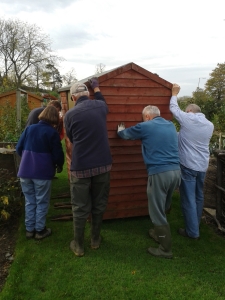 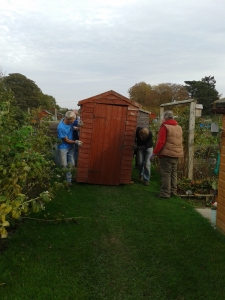 And here is the shed now transformed into a hide, just like the ugly duckling turning into a swan. The rest of the story of how the transformation came about will be in part two.

Wherever the pathway gets close to the bank we have planted a low boundary hedge from willows harvested on site and have woven whips of different coloured willows from the brightest yellow to the darkest black  through it. Similarly at the outlet end where water drains to prevent flooding, we have a steep area bank which we have given a similar low willow fence and we are slowly planting up the slopes with small ground covering shrubs that also attract bees, butterflies and hoverflies. 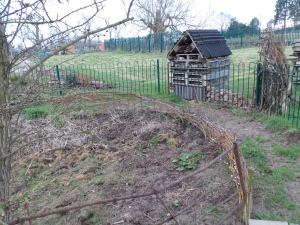 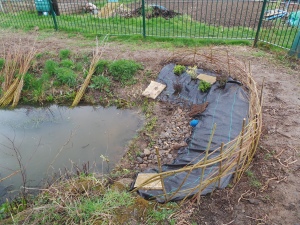 We stored the willow prunings we had after coppicing and pollarding our “Withy Bed”. The photo shows these awaiting action and illustrate just how many colours of willow we have to play with

A recent job was to make barley straw pouches to drop in the water to help keep down the growth of algae and blanket weed – a good organic solution. Look closely at the picture below to see if you can spot one.

We know there are some critters who are looking forward to us finishing or at least being somewhere near a livable place for them. the resident group of Weasels, our Mallard families and the site’s frogs. We must pamper to their needs as they entertain us and do much of our pest controlling. 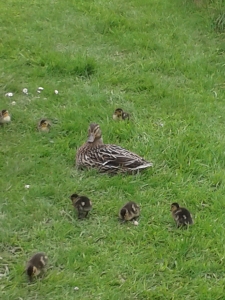 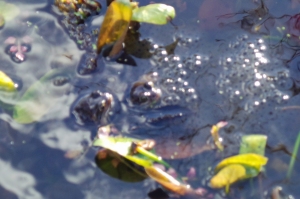 The bird in the fourth of the above photos though arrived amid mixed feelings from us all. Our Grey Heron is most definitely a handsome bird but he is a threat to our fish. We have a small population of native Rudd in the pond brought in as eggs on the feet of the ducks. Sadly until we get some plant cover for them to seek refuge beneath they will soon be wiped out by the Heron. The photo was taken on a member’s mobile phone through our green fence.

In part two we will look at details of how the hide ended up, some of our tree surgery work and the adventures we had putting in our duck tube.